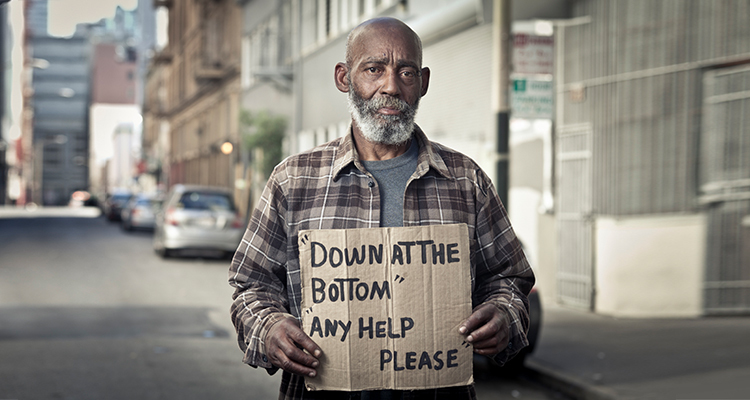 Because direct, physical violence is easy to see and recognize, it gets significant attention from both law enforcement and the news media. A violent crime, such as an assault or murder, is a discrete event that can be handled in a number of ways. Structural violence, on the other hand, is often invisible and challenging to respond to. Addressing structural violence typically requires large structural changes in society, and such changes happen slowly in part because it’s difficult to recognize structural violence as violence.

What Is Structural Violence?

Chronic undernourishment affected one in nine people worldwide from 2014 to 2016, according to the United Nations. The Economist reports that an estimated 1.49 million people in the United States used homeless shelters in 2014, and around another 500,000 went without shelter; those numbers are likely to be conservative estimates at best. Hunger and homelessness may not seem to fit the definition of violence, but they’re clear examples of structural violence.

“Structural violence occurs whenever people are disadvantaged by political, legal, economic or cultural traditions. Because they are longstanding, structural inequities usually seem ordinary, the way things are and always have been,” according to D.D. Winter and D.C. Leighton. Rather than being focused on direct, brutal acts, structural violence is the result of societal systems, such as social stratification, that have been in place for years — systems that create situations where people don’t have access to the things required to fulfill their basic human needs.

Perhaps the most challenging aspect of addressing structural violence is how difficult it can be to bring attention to it. “When social inequities are noticed, attempts are made to rationalize and understand them,” Winter and Leighton say. “Unfortunately, one outcome of this process is to assume that victims must in some way deserve their plight.” Because the constant presence of structural violence is desensitizing, the structures that maintain the violence become normalized and seen as “the way things are.” Because of this, it can be difficult to convince those with the ability to create change that there is a problem or that it can be addressed.

In 2015, 13.5 percent of the U.S. population — around 43 million people — fell below the federal poverty line of $24,250 for a family of four. When broken down into specific populations, it becomes easy to see that some populations have higher poverty rates. Poverty among whites was 9.1 percent during that time, compared to 24.1 percent among African-Americans; African-Americans have a long history of being the victims of structural violence in America.

Structural violence usually has, at its root, some political or economic structure that disenfranchises a group of people. For example, children in inner cities typically lack access to adequate schools, which limits their access to jobs with good salaries when they get older. This, in turn, limits their access to healthcare, legal protections, political power, safe housing and other important resources. This cycle of poverty perpetuates itself, creating entire communities subject to regular structural violence.

Access to resources like education, healthcare and purchasing power are all vital to breaking the cycle of poverty. Individuals without adequate access to healthcare are not only more likely to have shorter life spans, but also to spend a significant portion of their income treating illnesses and other health issues, or simply enduring them and reducing their ability to work and earn money. Without adequate education, access to good jobs and influence within society is limited. An inability to buy necessities like food and shelter leads to worse healthcare outcomes, less money spent on educating the next generation and so forth.

Effects on Individual and Public Health

Lack of proper maternal care is a significant source of structural violence directed against women. About 350,000 women die every year due to pregnancy-related causes, and nearly 99 percent of those deaths occur in poor countries with limited access to good maternal care.

The United States has the worst maternal death rate of any developed nation, at 26.4 deaths per 100,000 live births as of 2015, according to The Lancet. It is the only developed nation in which this death rate is rising. NPR cites several structural factors contributing to this, including disorganized hospital protocols for dealing with treatable complications, hospitals that are unprepared for maternal emergencies and the fact that only 6 percent of federal and state funding earmarked for “maternal and child health” actually goes to promoting the health of mothers.

Also of note is the AIDS pandemic, which is entering its third decade as a global medical crisis. An estimated 36.1 million people worldwide are infected with HIV; 25.3 million of these people come from developing nations in sub-Saharan Africa. In the United States, “rates are especially high among gay and bisexual men in communities of color and among heterosexual women living in poverty in the inner cities,” the American Journal of Public Health notes.

Pursuing a Career in Social Work

Social workers help combat structural violence by providing access to necessary services and resources among populations with limited access. While the factors that contribute to structural violence are complex and systemic, a skilled social worker can improve the lives of people within a disenfranchised community. An online BSW or online MSW from Campbellsville University can give you the tools and perspective you need to address social inequality and structural violence. Learn in a dynamic online environment at a pace that fits into your life.